SWFRS  have reported the above-mentioned fire which started in the premises refuse/bin store with smoke generated from the fire allowed to percolate upwards to  various floors via the bin chute.

The sprinkler head that had actuated had been added to the sprinkler system to provide more effective coverage, which proved to be the case on this occasion

This incident  clearly identifies  the benefits of installing fire sprinklers in refuse/bin stores.

Did you know that fire data on fire incidents in Great Britain where sprinklers were reported for the period of 2018/19 to 2020/21, identified;

Dangers of bin store fires: – It should be noted that the outcome of a communal bin store fire can have a dramatic effect on the safety of the residents, specifically where refuse chutes and access hatches can sometimes be found directly opening onto protected corridors, lobbies and stairs, so providing the potential for the spread of fire and smoke to the common escape routes.

It is therefore best practice In these situations: –

*From March 2022, a series of reports are to be published by BAFSA providing a detailed analysis of ²compound data on fire incidents in Great Britain where fire sprinkler systems were reported as present, operated over the period of 2018/19 to 2020/21.

The aim of the analysis is to focus on identifying trends, discussion points and insights relating to the use of sprinklers within Great Britain. The outcome of which will evidence that can be used to influence change making the installation of fire sprinklers the norm not the exception

(To be published:- April 2022, report No 2  focusing on the location of the fire where sprinklers were reported as being present, activating inside/outside flats in purpose built block of flats)

² Source: FOI Requests for Incident Recording System Data relating to primary fires attended by FRSs in which sprinklers were present for England, Scotland, and Wales for the financial years 2018/19 to 2020/21 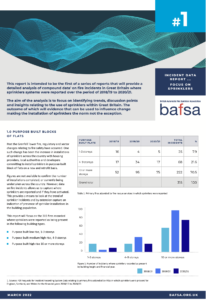