SYFRS have reported the above-mentioned incident which took place at Hatfield House, Balby Bridge involving the the actuation of the residential sprinkler system, 1 fire sprinkler head actuated which successfully extinguished the fire before the arrival of SYFRS.

The cause of the fire was identified as a set of heated curlers left on the bedding which caught light, the resident tried to extinguish the fire but unsuccessful and evacuated the flat, fire damage was contained to the room of origin

“Fire Sprinklers are a cost effective way of making high-rise, residential dwellings safer – they stop fires from spreading, put them out quickly, save lives and have a long working life span. We’re proud of the reputation we’ve built nationally as a leading fire and rescue service for our long standing advocacy of the benefits of fire sprinklers. It’s pleasing to see that not only are housing providers understanding these benefits as well, but that they have done their job at an incident which might otherwise have been much more serious.”

This incident clearly identifies the benefits of sprinklers;

The dangers of these beauty products should not be underestimated, straighteners can reach temperatures of over 200 degrees and can take up to 40 minutes to cool down.

Sprinklers were installed on this occasion, when you compare this to the incident below the outcome could have been so much different. 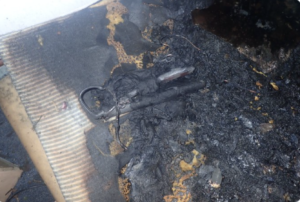 LFB tweeted the above photograph following a fire in London in 2018 as a warning to identify how dangerous these types of products are where basic fire safety measures not followed resulting in;